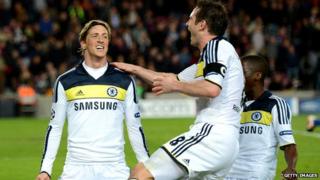 Ten-man Chelsea have stunned footballing giants Barcelona to win a place in the Champions League final.

In a dramatic match, John Terry was sent off, Gary Cahill limped off injured, Messi missed a penalty and Torres scored the winning goal!

The final score of 2-2 in Spain made it 3-2 on aggregate after Chelsea's 1-0 victory at Stamford Bridge.

The Blues went down 2-0 early on and John Terry was sent off for hitting Sanchez with his knee. 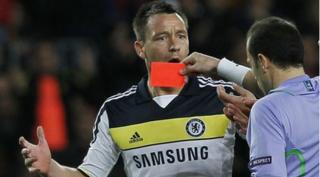 AP
John Terry has apologised to fans for his red card.

But then the incredible comeback began, with Brazilian midfielder Ramires lifting the ball over Victor Valdes to make it 2-1.

The world's best footballer, Lionel Messi, then missed a penalty but as Barcelona pushed for a winner, Chelsea's off-form Fernando Torres broke clear to slot one home in the dying moments of the game.