Will we see the first ever 'petrol station' in space? 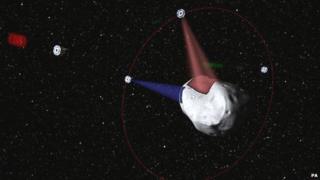 The inventors of Google, along with the film director James Cameron, are teaming up with scientists for a multi-million dollar plan to get energy from asteroids.

They say they've worked out a way to squeeze rocket fuel, gold and platinum out of the rocks which whizz through space.

One of the inventors of the technology reckons they could have their version of a space-based petrol station up and running by 2020.

The first part of the plan, they say, is to launch telescopes to look at the details of asteroids.

Then they will use machinery to suck chemicals out of the asteroids and convert them into fuel.

Water, for example, could be sucked out and converted into hydrogen and oxygen - the elements from which it is made.

Then the asteroids could be used to refuel rockets that are travelling nearby - just like a petrol station.

The scientists say it may sound crazy but the idea of putting people on the Moon was once thought to be crazy too. 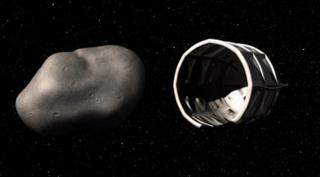 PA
This artist's impression shows a space station docking around an asteroid in order to extract water from it.

Former astronaut Thomas Jones, who is helping the makers with their ideas, says, "It is the stuff of science fiction but like in so many other areas of science fiction, it's possible to begin the process of making them reality."

Asteroids are rocks which have flown around in space for millions of years. Some are very small, others are 10 miles wide.