What are National Parks? Ricky finds out

National Parks were created in 1951 but we have a group of illegal protesters to thank for them.

Celebrations have taken place to mark the 80th anniversary of the 'mass trespass' on a mountain which led to a change in the law.

On 24th April 1932, 400 protesters dared to walk over Kinder Scout, a mountain in the Peak District.

They were angry because rich landowners could stop others walking in open countryside.

They deliberately walked in areas they weren't allowed to go and fights broke out with the people who owned the land. Five walkers were jailed.

A few weeks later, 10,000 held a protest at Winnats Pass, which is very close to Kinder Scout. 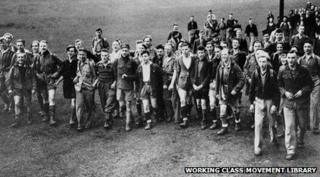 WORKING CLASS MOVEMENT LIBRARY
Thanks to this illegal protest in 1932, we can walk freely in National Parks

It led to a change in the law, and the opening-up of the Peak District National Park in 1951.

The UK's 15 National Parks are large areas where it's free to walk in the countryside, even if the land officially belongs to someone.

The organiser of this week's event, Roly Smith said: "I believe we should never forget the sacrifice made by the young lads from Manchester who were arrested and imprisoned for walking on the moors."