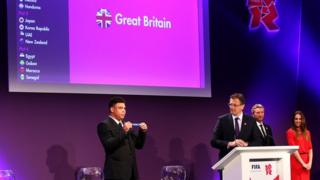 The draw to decide which football teams will face each other in the Olympics has been made.

The men's team will play against Uruguay, Senegal and United Arab Emirates.

The toughest match for the men looks like being Uruguay, who are third in Fifa's world rankings.

Great Britain's women's footie team will kick off this year's Olympic Games with a match against New Zealand.

They've been drawn to face each other in Cardiff's Millennium Stadium on 25 July, two days before the opening ceremony. The GB women also face Brazil and Cameroon in Group E.

The men's first game is against Senegal at Old Trafford, Manchester, on 26 July.

16 men's teams and 12 women's teams will go for gold at this summer's Olympic Games.