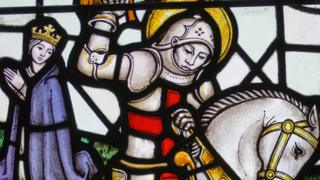 Getty Images
St George is the patron saint of England (and other countries, in fact!)

On 23 April, many people across England celebrate the country's patron saint St George.

Patron saints are chosen as special protectors or guardians over all areas of life.

England, Scotland, Wales and Ireland all have their own patron saints.

What is St Andrew's Day?

What is Saint Patrick's Day?

The flag of Saint George - a red cross on a white background - is England's national flag and is incorporated into the Union Flag (the UK's flag). 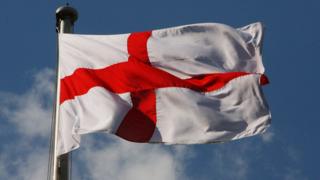 Daniel Berehulak
The cross of St George features on the flag of England
Who was Saint George?

Very little is actually known about George and there's a lot of stories about him that are full of myth and legend.

It is believed he was born in a place called called Cappadocia - an area which is now in Turkey - and he lived during the 3rd Century.

His parents were Christians and, after his father died, his mother took George to live in the Middle East, where she was originally from. 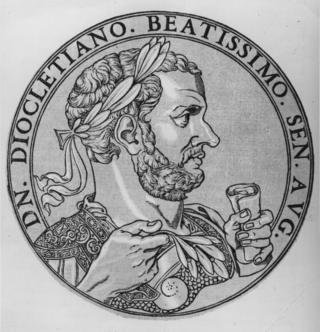 Hulton Archive
The emperor at the time, Diocletian (in this illustration), did not treat Christians well

He was put in prison and tortured because of this, but he refused to turn away from his religious beliefs. He was eventually executed.

It is said that the Roman Emperor's wife was so impressed by how George did not give up his faith that she became a Christian too.

It is believed that she was executed in the same way George had been.

What about the dragon?

One story many people think of when St George's name is mentioned, is that of him slaying a dragon.

This story became popular when it was printed in 1483 in a book called The Golden Legend.

Legend has it that George came to a city called Silene, in a country called Libya, where there was a dragon.

The people of the city were feeding sheep to the dragon every day to stop it from attacking them - but they ran out of sheep! 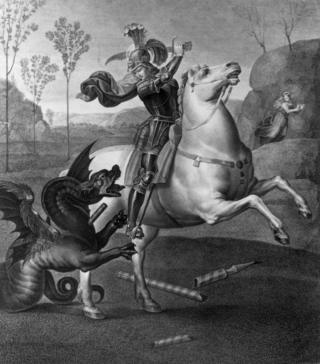 So they had to nominate people from the town to be sacrificed to the animal.

When the king's daughter was selected, he tried to protect her - but the people of the town refused, saying that if they were expected to sacrifice their loved ones to the dragon, why shouldn't he?

George came across the princess waiting to be sacrificed to the dragon, and she told him what was happening in the town.

The dragon turned up and George is said to have fought with the dragon and captured it, putting a collar round its neck.

The princess led the defeated dragon into the city, and people were terrified when they saw it! George told them not to worry and put their faith in God.

The town converted to Christianity and eventually the dragon was killed.

Why is St George the patron saint of England? 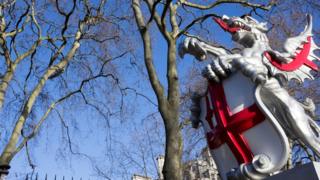 One thing that we do know about St George is that he wasn't actually English. It is even believed that he may never have stepped foot in the country!

Some people have actually campaigned for St Edmund to be the patron of England, as they believe he is more English and more suitable for the title, but the country's patron saint has not been changed.

He made St George the patron of this Order and its badge depicts George slaying the dragon, so St George remains an important symbol of knighthood in this country. 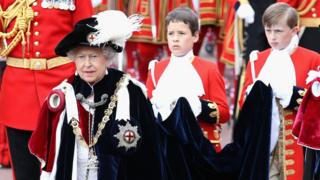 Getty Images
Here, the Queen is attending a service for the Order of the Garter at St George's Chapel at Windsor Castle. You can see the St George's cross on what she is wearing

St George's Chapel was built at Windsor Castle by Edward IV and Henry VII, and made the official chapel for the Order of the Garter.

English soldiers also used to wear the cross of St George on their fronts and backs.

From the 14th Century, Saint George came to be regarded as a special protector of the English.

How is St George's Day celebrated? 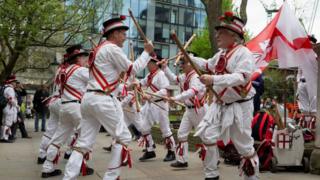 Normally there would be traditional parades and celebrations like fetes, church services and traditional English activities like morris dancing.

With some lockdown restrictions easing some smaller, socially distanced events are going ahead for 2021.

In Birmingham there will be a parade of motorcycle riders, instead of a huge parade.

However others have been moved online to keep everybody safe.

Some places have online puppet classes happening teaching you how to make a dragon puppet!

Maybe you could decorate your home or if you're feeling really crafty make some flag bunting from pieces of paper. 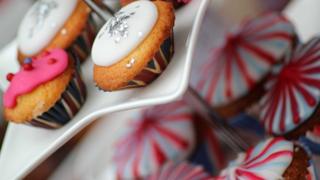 Perhaps you could draw a picture of St George or his flag to put in your window for other children to spot.

You could also dress up as a character from one of the legends surrounding St George, maybe as a knight or a dragon.

If none of those take your fancy, maybe you could just mark the occasion just by having some good old fashioned English food. Anyone for a scone or some fish and chips?

St David's Day 2021: Everything you need to know