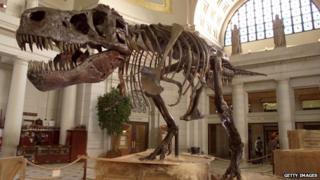 A group of builders in Russia's Chechnya are claiming to have unearthed the 'world's biggest dinosaur eggs.'

The discovery was made as the men were blasting through a mountainside to create a new road.

A team of geologists looked at the smooth, oval rock-like forms and it was not long before they began to believe they were staring at huge fossils.

The eggs range from 25 centimetres to one metre in size and more than 40 have been found so far. 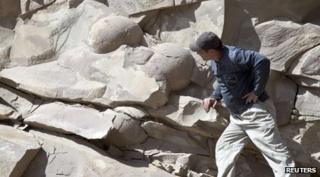 Reuters
The 'eggs' were found in the Caucasus mountains of Chechnya

However, not everyone is so convinced.

One Russian dinosaur expert, or palaeontologist as they are also know, doesn't think the eggs are real.

"Unfortunately, it's not true. Dinosaurs laid small eggs and they did not lay eggs while jumping about like mountain goats" she said.

Dinosaurs have been extinct for 65 million years, but new discoveries of their bones and eggs are still made today.