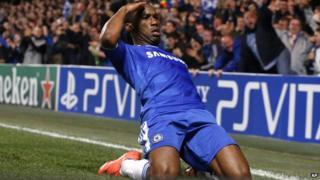 Chelsea will take a precious one goal lead into the second leg of their Champions League semi-final after beating Barcelona 1-0.

Didier Drogba scored the only goal of the game on the stroke of half-time.

Barcelona controlled most of the game with 72% of the possession but could not find a way through Chelsea's defence.

The win and perhaps more importantly the clean sheet, gives The Blues a good chance of reaching their first Champions League final since 2008.

But it won't be easy. Barcelona are the current holders of the trophy and have not lost at home all season. 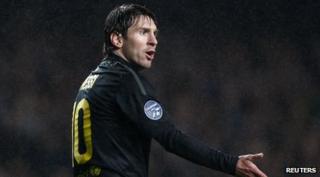 Reuters
Lionel Messi was well marked by the Chelsea defence

Match of the Day pundit, Mark Lawrenson, thinks it can be done, though.

"It will be a very difficult task for Chelsea in Spain but if Di Matteo's side can just pinch a goal, then Barcelona have got to score three," he said.