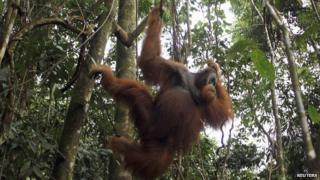 Scientists have discovered orangutans use really complicated building skills when they build their nests.

Research has revealed that the great apes use many different types of branches in lots of different ways to build their homes high up in tree tops.

That's amazed scientists from the University of Manchester, who spent a year in South East Asia studying orangutans.

But when some can weigh up to 80 bags of sugar - the nests need to be strong! 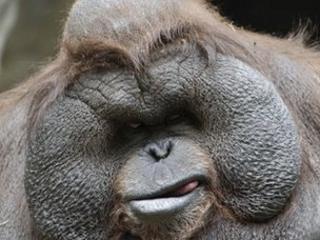 The research took place in Northern Sumatra, an island in Indonesia, where researchers filmed the apes building their nests and took them apart when they were finished with them.

The experts learnt that the nests were made up of a really complicated scaffold of branches and twigs - and tools were used to help make them.

Thick green, bendy branches were used on the outside and thinner leafy twigs on the inside, making a strong flexible nest that was comfy inside.

Other great apes like gorillas and chimpanzees also build nests.

The study also revealed that they could build a nest in 5 to 6 minutes, which is pretty lucky as they a make new one every day.

Building a nest as high as three double-decker buses can be a risky business but it seems orangutans use their skills and brains to make them as safe as possible.