Plane forced to return to Gatwick for emergency landing 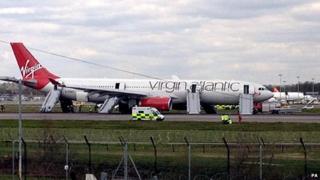 A plane has had to make an emergency landing just minutes after leaving Gatwick.

The Virgin plane on the way to Orlando, in the US, was forced to return to the airport after smoke was reported in the cabin.

Liam Moore, a passenger on the Airbus said, "It all happened so quickly."

"We landed, all the doors flung open and the emergency slides were inflated. We had to slide down the chutes, some people got cuts and grazes from the slide."

No one was seriously hurt.