Over half of children have been bullied playing sport 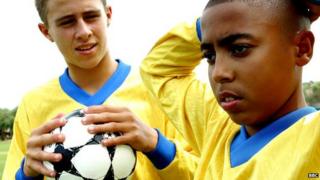 A campaign has been launched to stop kids being bullied in sport.

It follows a report that says over half of kids in the UK have been victims of bad sportsmanship.

The MCC and the Chance to Shine charity talked to 1250 children and say bad sportspeople could be copying the behaviour of sports stars like Premier League footballers.

But the report also found most children aren't impressed by players who break the rules. Seven in 10 would describe someone who played unfairly as a "cheat".

We asked if you've ever treated you badly while playing sport or seen it happen to your teammates.

"I have seen people being bullied just because of the sports that they do. For example, I know some boys that do ballet and have been bullied because most people think that ballet is a girls sport but that's not true, anybody can do ballet, boy or girl."

"I have only ever once been bullied playing sport at my hockey club. I accidentally missed the ball and some boys started coming up to me and shouting.

I think it's wrong to bully other kids when they are playing sport because it will discourage them from doing it, making them less active."

"I was playing in a netball game and missed a shot and some of my team were having a go at me."

"Sometimes children in younger classes than mine do get bullied and aren't allowed to play because someone else in their class say that they're not good enough. The teachers always sort it out and make sure no-one is left out."

"In football my team-mates were mean to me because I didn't save a goal as I was recovering from being kicked (by mistake). They shouted at me which made me feel sad. The referee didn't see so he didn't do anything."

"I don't regularly see people being mistreated during sports."

"When I played football someone stuck their leg out as I was about to score. I broke my leg and I don't play football anymore."

"I know someone who got bullied because he would always do bad fouls and kick the ball over the fence."

"Some boys in my class are mean to my friend, because she's not as fast as them."

"I was bullied while playing football just because I didn't have boots. Then they saw me goalkeep very well and ended up saying good things about me."

"I think people get bulled because they're not good at sports. We should stop people bullying."

"In my school we have a football pitch in the playground. However, the girls aren't allowed to play on it with the boys as this leads to comments from the boys about girls not being able to play as well as them. For some girls it has led to teasing or bullying by the boys."

"I have people say, 'Oh come on!' when I miss a shot. One boy says "Fail!!!" whenever anybody does anything a teensy bit wrong."

"I was bullied for 7 years. I love to play football, its what I do 24/7 but because I'm a girl people couldn't take that I was better at a 'boys' sport...

Most of the bullies didn't make it in to their secondary schools football team. I rose above the bullying and now I'm captain for the year 7 & 8 team. I play in a Saturday league and I play for my county."

"My brother and I play rugby and are both forwards so don't get bullied, physically, but I do see it a bit with others."

"People these days take everything to heart, it's not bullying. If anyone makes a tackle in football their parents start shouting abuse. In the heat of the game things happen, it should be what happens in the game stays in the game. Just stop over-reacting to everything!"

"People have treated me badly while playing football. I was at my local football club - as I loved playing football - and I was a defender playing with Year 6 boys. I accidentily let the ball pass me and the boys shouted at me loudly and aggressively. The referee didn't do anything."

"Sometimes I see people look disappointed when I'm in their team and they look angry with me when I miss something."

"My best friend got hit by a hockey stick on purpose because we were winning at a game of hockey."

"I've seen loads of bullying in my school and I usually see it in the rough sports. I've been purposely hit by a hockey stick before and recently someone pushed my best friend over on purpose during netball."

"I used to get bullied but I'm good at dancing. One time, no one could do the moves but as soon as they saw I could they stopped teasing me and asked for my help. Just show them what you can do better than them!"

"I have been bullied while playing sport, some boys say things that lower my confidence so I don't perform as well as I could. They also bully me about my tracksuit length, so I try to stay away from them."

"It's wrong to bully because it makes sport not as fun."

"When people get competitive they say things they do not mean, especially in sports. Don't worry if it happens to you, just talk to a teacher!"

"I think some people get bullied because they're not good at it or they're not fit enough."