David Cameron has become the first UK prime minister ever to visit Burma.

He's visiting to see how the country has progressed since the way it was run changed in 2011.

Burma, also known as Myanmar, was under brutal military rule for almost 50 years and many people including children suffered greatly.

For this reason many nations including the US and the European Union refused to trade with Burma, leaving the country with few friends.

In a speech, Mr Cameron said that other countries should relax the trade restrictions on Burma for the time being, to allow the country to continue its recovery.

The Prime Minister's visit to Burma is the first by a major Western leader in 50 years. 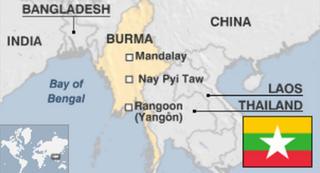 Burma is located in South Asia and is bordered by India, Bangladesh, China, Laos and Thailand

The way the country is run changed after Burma held its first general election in 20 years in 2010.

After the election, a new government was formed in 2011 that wasn't run entirely by the military.

People who'd been imprisoned for protesting against the old rulers were released, as bit by bit the country moved towards democracy.

In April 2012, America relaxed its trade and travel restrictions with Burma, because they said the country was making good progress.