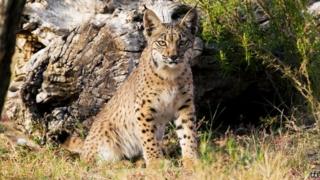 The world's most endangered species of cat could have been saved from extinction thanks to a project in Spain.

The Iberian Lynx used to live all over Spain and Portugal, but by 2005 their numbers were down to just 150.

The decline was because a disease wiped out the rabbits they eat, and lots of places they lived in were destroyed.

Now, 100 lynx have been bred in special centres and they're being released back into the wild for the first time.

Their new home has been carefully selected by the experts.

It is a hilly, forested area, so the lynx can find shade when it gets too hot. And most importantly, there are plenty of rabbits.