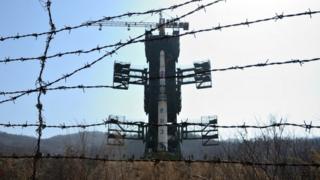 A rocket launched by North Korea has exploded just after taking off.

The unmanned spacecraft broke up into about 20 pieces, which crashed back down to Earth and landed in the sea.

North Korea says the rocket was meant to carry a satellite into orbit.

Other countries think they were trying out technology that could be used for a nuclear weapon.

North Korea is one of the most secretive countries in the world so it's really difficult for the outside world to find out exactly what's going on there.