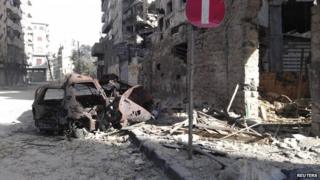 A ceasefire has begun between the Syrian government and anti-government rebel groups.

Violence between the two sides has been raging in the Middle Eastern country for over a year.

The United Nations say that 9,000 people have died since the fighting started in March 2011.

The truce, which was organised by the UN, seems to be holding with no reports of any trouble so far.

Click here for our guide to the Syria Crisis

The crisis started when Syrian people, inspired by the "Arab Spring" revolutions in Tunisia and Egypt, began protesting about how their own country was being run.

President Assad, who's in charge of Syria, tried to stop the protests with army soldiers and tanks. Fighting soon spread across the country.

The ceasefire is part of a plan the UN has come up with to work towards peace.

It also says that aid must be allowed into the country, and the Syrian people should be able to protest peacefully without being attacked by the army.

No-one knows whether the peace plan will work - and some countries like America and Germany say they don't believe the Syrian government will go along with the UN's suggestions.

For now at least, it seems that the violence in Syria has calmed.