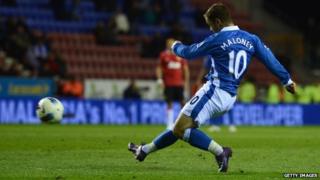 With the Premier League title almost in the bag, Manchester United must have thought an easy match against Wigan would send them three points closer to glory. WRONG!

Wigan were the better side, and a brilliant strike by Shaun Maloney in the second half secured them a 1-0 win.

It's the first time Wigan have EVER beaten United!

The result means that Manchester City have closed the gap at the top of the table to five points, with five games to go. 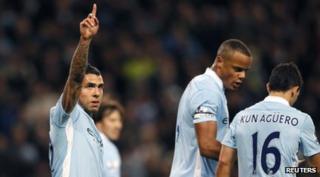 Reuters
Carlos Tevez scored his first goal of the season

City thrashed West Brom 4-0, which included two goals from Sergio Aguero and one from returning striker Carlos Tevez- his first for the season.

Wigan have climbed out of the relegation zone after their win.

In the other games, Arsenal beat Wolves 3-0, and there was a win for QPR, who smashed Swansea by the same score.