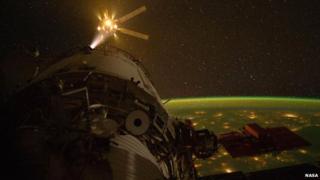 Nasa has released this beautiful picture of the moment a supply spacecraft arrived at the International Space Station.

The unmanned spaceship was bringing up oxygen, food, fuel and other supplies for the six astronauts on board.

It's called Automated Transfer Vehicle-3 (ATV-3 for short), and took five days to reach the space station from Earth, docking on 28 March.

The crew had to change their sleeping patterns so they could monitor the arrival to ensure nothing went wrong.

ATV-3 is expected to stay at the space station until early September, when it will be released and will burn up in the Earth's atmosphere.