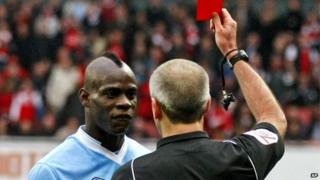 Manchester City boss Roberto Mancini says he will "probably" sell Mario Balotelli in the summer, after the striker was sent off again on Sunday.

It made Easter Sunday a bad one for City after their 1-0 loss to Arsenal.

That means they are eight points behind United and will - probably - lose the Premier League title to their Manchester rivals.

Manchester United extended their lead after a 2-0 victory over QPR.

In Sunday's match at the Emirates Stadium, Balotelli made a studs-up tackle on Alex Song but it wasn't seen by the referee.

But after two yellows for challenges on Sagna, the man who asks "why is it always me?" was shown red.

His boss Mancini said the striker would be unlikely to play again this season, and was then asked if he would sell Balotelli in the summer.