Eighteen of the world's most endangered ducklings have hatched on the island of Madagascar, off the coast of south-east Africa.

These Madagascar pochards are the results of a breeding programme that's hoping to save the rare birds from extinction.

The births at a special breeding centre bring the world population to just 60.

The species was rediscovered six years ago, after scientists thought they'd become extinct in the 1990s. 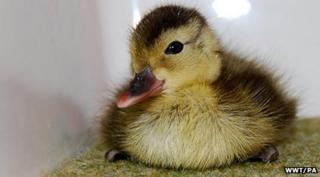 WWT/PA
There are only 60 Madagascar pochards in the world

A mission to save them was launched in 2009 - conservationists from Durrell and Wildfowl and Wetlands Trust (WWT) collected 24 eggs for a breeding programme.

There was no centre back then, so the ducklings from those eggs were reared in a hotel bathroom at first!

Scientists are studying the Madagascar pochard population to work out why they're so rare.

Peter Cranswick from the Wildfowl and Wetlands Trust (WWT) said: "Our initial investigations suggest there is too little food and this may be leading to the low survival of the ducklings."

The hope now is to find or create wetlands where the birds can survive on their own.