Horrible Histories is back for a new series on CBBC 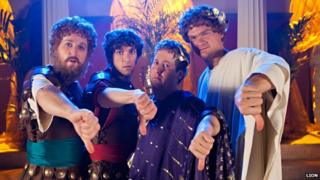 Horrible Histories is back for a new series - but you might be surprised to hear that not everyone loves the show.

The cast told BBC Breakfast that some historians have complained that the programme is 'dumbing down' history.

Simon Farnaby, one of the programme's actors, says that the best thing about it is that it shows "the part of history you don't get to do in school".

The cast say that they've had loads of comments from parents saying it's got their kids interested in the subject.

And it's not just kids who are big fans of the show - it's been a hit with adults too.

The show is the only children's TV programme to win best sketch show at the British Comedy Awards. And it's won the award two years running!

The new series of Horrible Histories starts on 9 April at 5pm on the CBBC channel.