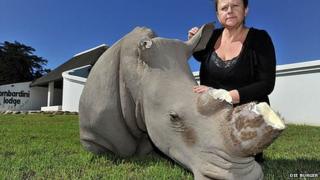 A model rhino made of fibreglass has had its horn chopped off by a burglar at a game reserve in South Africa.

Rhino horns can be sold for loads of money in east Asia, where they're used in traditional medicine.

But this thief probably won't get much cash for his horn - because it's made of fibreglass!

"I was angry at the time, but it was also funny," game reserve owner Susan Lottering said.

"We found it outside on the sidewalk with its horn cut off - the burglar was looking for money and they didn't find any money so I suppose their eye caught [sight of] the rhino."

The sculpture is a replica of the first rhino to arrive on the farm.

There are 15 real white rhinos living there and all of them have been dehorned already because of poaching fears.