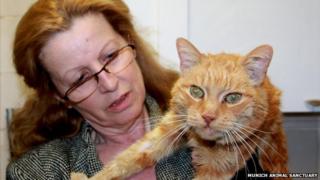 A cat in Germany that's been missing for 15 years has turned up and been reunited with its owner.

Poldi the ginger was found sitting on a log in a forest outside the city of Munich - underweight and missing his front teeth.

He was taken to an animal sanctuary and they identified him from a numbered tattoo on his ear.

Poldi will now be reunited with her owner, who had given up hope of ever seeing her moggy again.

She said she thinks Poldi ran away because he didn't get on with her other cat.

It's unusual for cats to live past the age of 15, making Poldi's discovery even more remarkable!