Project Glass will let wearers access the internet and other services through a stamp size screen attached to a pair of specs.

There hasn't yet been a date set for the release of the glasses. 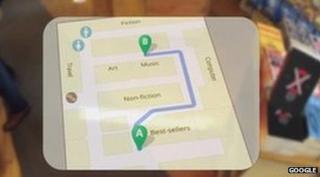 The special specs are currently being tested out by members of the Google X team to see how they could work in everyday life.

When they do hit the shops it's expected that they'll cost around £160 to £320 - so you'd better start saving now if you want some!

The team are also rumoured to be working on self-driving cars and lifts to take people into space.