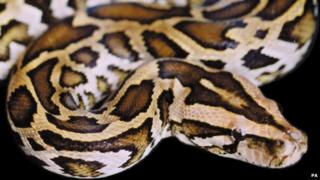 For some people flying can be scary enough without this happening.

A plane in Australia was forced to make an emergency landing after a snake popped out from the dashboard and slithered up the pilot's leg.

The pilot, Braden Blennerhasset, was able to safely land the plane while trying to keep as still as possible.

The sneaky creature had stowed away on the cargo plane before take-off and hidden.

The 26-year-old pilot made a radio call through to air traffic control saying "I'm going to have to return to Darwin. I've got a snake on board the plane."

The slippery reptile slithered away before it could be caught - but a trap set on the plane did catch another stowaway, a mouse!

Wildlife experts called to the scene think that the snake was a golden tree snake, a non-venomous species that can grow up to a massive 1.5 metres long.

The airline company think that it's the first time a snake has been found on a plane in Australia.