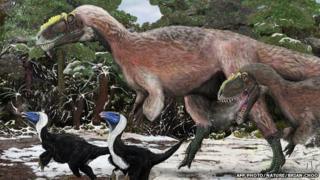 Scientists have unearthed the biggest ever feathered dinosaur in north-eastern China.

It's been named Yutyrannus huali meaning "beautiful feathered tyrant" and it lived 125 million years ago.

The meat-eating cousin of T-rex weighed more than a tonne and was about as long as a double-decker bus.

Three near-complete skeletons were discovered and showed the dinosaur had sharp teeth, three-fingered hands and walked on its back legs. 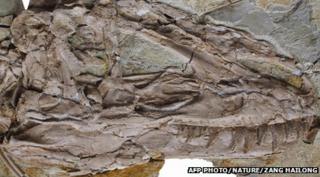 The Yutyrannus huali was too big to fly, which raises questions about why it had feathers.

One idea is that they helped it keep warm, while another is that the feathers were there to attract a mate.