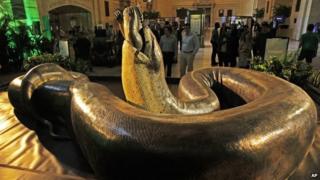 The prehistoric snake Titanoboa certainly lived up to its 'titan' name when it roamed the Earth 58 million years ago.

It was 14 metres long, weighed more than a tonne and could swallow a crocodile in one go!

The discovery of the Titanoboa fossil at a coal mine in Colombia, South America, has helped reveal quite a bit about the past...

Titanoboa's size is a sign that the Earth was much warmer than it is now - because snakes rely on heat from outside their bodies to survive.

"We think the Titanoboa became this large because it was much warmer on the equator after the dinosaurs died 60 million years ago," said evolution expert Dr Jonathan Bloch.

This evidence is somewhat reassuring given worries over global warming, as it shows animals and plants can cope in high temperatures. But it doesn't account for the rate of climate change. 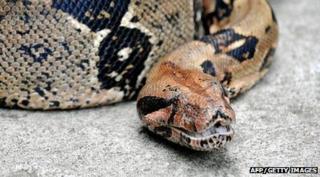 Experts also think that reptiles were generally much bigger than they are now.

They found turtles the size of a kitchen table and the biggest crocodile fossils ever recorded, in the same place where they discovered the Titanoboa!

"After the extinction of the dinosaurs, this animal, the Titanoboa, was the largest predator on the surface of the planet for at least 10 million years," said Dr Bloch.

As the Earth's temperatures rise, there's a possibility the Titanoboa - or something like it - could make a comeback.

But scientist Dr Carlos Jaramillo points out that it wouldn't happen quickly: "It takes geological time to develop a new species. It could take a million years - but perhaps they will!"