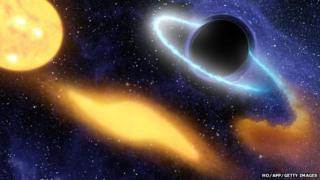 Supermassive black holes grow to their huge size by gobbling up stars, new research has shown.

Most galaxies, including our Milky Way, have a supermassive black hole in the centre.

US scientists studying our black hole think it rips apart pairs of stars (binary systems) that wander too close.

One star is then thrown out into space, while the other gets trapped in orbit around the black hole and is eventually swallowed up, adding to the total mass.

Black holes have gravity so strong that even light cannot escape them.

"They can double their mass in less than a billion years. That may seem long by human standards, but over the history of the galaxy it's pretty fast."

Black holes can become as big as the mass of billions of suns put together.