Newsround looks back to 1990s

To celebrate 40 years of Newsround we've been stepping back in time and taking a peek into the BBC Archive.

In this special report, Ore looks back at the 1990s - the decade that saw the internet change our lives.

Pop groups dominated the charts, with the Spice Girls, STEPS and S Club 7 all clocking up number 1 singles. 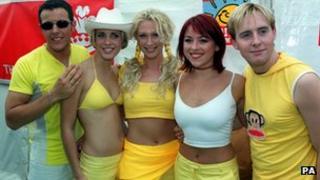 PA
Big in the 90s, STEPS have reunited for a tour this year

In sport, David Beckham made his football debut with Manchester United and the Premier League was formed.

One of the biggest stars of the 90s was a sheep named Dolly - the first cloned mammal in history.

Click play now for the lowdown on these stories and loads more!