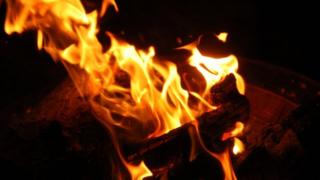 Tiny traces of wood ash were discovered among million-year-old animal bones and stone tools in a cave in South Africa.

There was also colouring on the ground that points to controlled fires started by humans in the area.

The start of human fire use is important because it led to activities such as cooking and keeping warm.

"Socialising around a camp fire might actually be an essential aspect of what makes us human," said Michael Chazan from the University of Toronto.