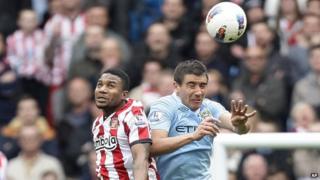 Man City's astonishing run of 20 Premier League home wins in a row has ended, after Sunderland held them to a 3-3 draw.

City came back from being 3-1 down with two late goals from Mario Balotelli and Aleksandar Kolarov.

But it means they dropped a vital two points and slipped further behind title race leaders Man United.

On Sunday, Liverpool lost 2-0 to Newcastle thanks to a double from Papiss Cisse. 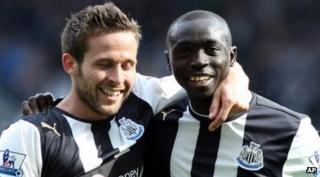 Manager Kenny Dalglish said his side has to unite: "We've just got to realise that if we stick together and believe in what we're doing, then we've got a better chance."

Newcastle's victory means they keep the heat on Chelsea in the race for fifth spot - both are on 53 points, but the Blues edge it on goal difference.

Tottenham drew level on points with their London rivals Arsenal - Spurs beat Swansea 3-1 on Sunday after Arsenal lost 2-1 at QPR the day before.

Both London teams are on 58 points, with just a single goal keeping Arsenal ahead in third place.