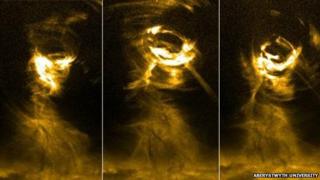 A group of scientists have spotted 'solar tornadoes' on the surface of the Sun.

The team from Aberystwyth University in Wales used a telescope on board Nasa's Solar Dynamic Observatory to make the discovery.

The storms, which are thought to be the same size as our planet Earth, are the biggest ever to be captured on film.

The film shows the super-heated gases rising up and becoming twisters.

It's thought that the storm lasted for almost 3 hours.

The hot gases in the tornadoes have speeds as high as 186,000 mph, which is 2000 times faster than the ones found on Earth.

The team will present a movie of their findings at a National Astronomy Meeting in Manchester on Thursday.