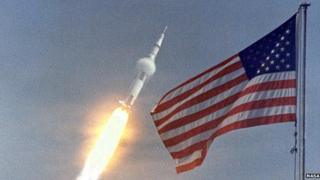 He says that he's found the engines from the Apollo 11 space rocket - the craft that carried the first men to the moon in 1969.

The five engines broke off from the spaceship after blast off and crashed somewhere in the Atlantic Ocean.

He's now planning on trying to bring one of them to the surface.

Mr Bezos paid for a team to use advanced sonar scanning equipment to track down the lost F-1 engines.

They were found 4,300 metres below the surface of the Atlantic Ocean, but he hasn't said exactly where they were spotted.

In a blog post about the discovery he wrote: "I was five years old when I watched Apollo 11 unfold on television, and without any doubt it was a big contributor to my passions for science, engineering, and exploration."

He said he was going to ask Nasa, which owns the rockets, for permission to display one of the engines in the Museum of Flight in his home city of Seattle.