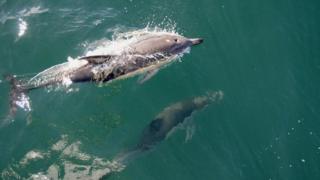 We already knew that dolphins are clever creatures but it turns out that they are even more like humans that we thought.

Scientists studying bottlenose dolphins in Australia have discovered that the males live in gangs.

By travelling in groups, the males have better chances of protecting their females and fighting off rival gangs.

Until now, only humans and elephants were known to live in complex social groups.

The study found that male dolphins can belong to around three separate groups, all of different sizes.

When a gang encounters a group of males, they then decide if the new dolphins will be friends or enemies.

Occasionally, the males even switch groups and to join a different gang they meet on their travels.