Comets could have brought early life to Earth 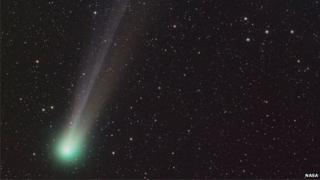 Scientists think that early life may have been brought to Earth by comets.

Nasa experts think that when they crashed into the planet they may have brought supplies of water and organisms - the basis for early life.

Life is thought to have started on Earth around 3.8 billion years ago, at a time when the planet was battered by loads of comets.

Teams of scientists have been recreating the impact of the comets hitting Earth in a laboratory.

They've found that key chemicals, called amino acids, would have been carried on the comets and would have survived the collision.

The scientists reckon the shock of a large comet's impact created the energy needed to start sticking the amino acids together to make proteins.

These proteins would then have been the basis for all living things on our planet.