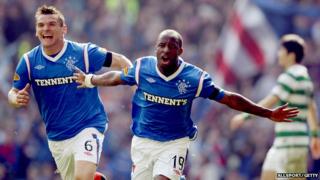 Rangers stopped Celtic from taking the Scottish Premier League title at Ibrox after claiming a 3-2 win.

It wasn't an easy game for either side - Rangers had one player sent off and Celtic had to play most of the match with just nine men after two early red cards.

Celtic manager Neil Lennon was also sent to the stands after a disagreement with the referee during the half-time break.