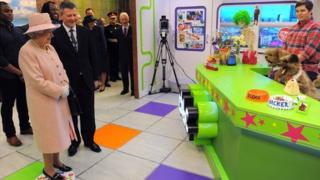 Her Majesty the Queen and her husband the Duke of Edinburgh, have visited us at MediaCityUK in Salford.

The Queen's touring the UK as part of her Diamond Jubilee celebrations and came to open MediaCityUK officially.

A big crowd greeted her before she went on a tour to see our studios and meet Ore and other CBBC presenters like Hacker and Dodge.

The two cheeky dogs said they'd thought she'd bring the corgis with her - and begged Her Majesty for cucumber sandwiches!

Before leaving MediaCityUK, the Queen also waved a flag to start a Sport Relief Mile race.