The biggest space vehicle servicing the International Space Station (ISS) has taken off from French Guiana.

The ATV 3 space truck is taking new supplies of food, water, air, and fuel to the station.

It is also carrying experiments and spares for the high-flying astronaut outpost.

The ATV 3 is unmanned and is the biggest space vehicle servicing the station.

Europe plans to send two further freighters to the station, in 2013 and 2014. 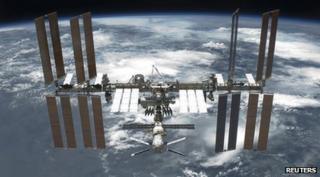 Reuters
The space truck is heading to the International Space Station

The space truck is expected to arrive at the ISS during the night of the 28/29 March.

Ground controllers have made contact with the truck and say its solar panels and onboard power systems are working.

The craft will stay attached to the ISS until September and will also push the station higher into the sky because it naturally drifts back to Earth.

The ATV 3 space truck is the third such craft to be sent to the station by the European Space Agency - the other two were launched in 2008 and 2011.