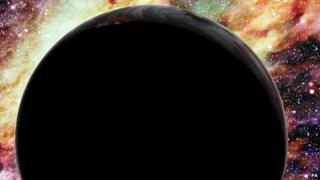 Scientists reckon that 'warp speed' planets could be flying through the galaxy at speeds of up to 30 million miles per hour.

Computer simulations have shown how the huge gravitational pull of black holes can tear planets from their orbits and 'sling' them across space.

The planets would typically move at about seven to 10 million mph - but could travel at up to 30 million mph.

That's more than 450 times faster than the Earth moves around the Sun.

"These warp speed planets would be some of the fastest objects in our galaxy," says Dr Avi Loeb, on the research team at the Harvard-Smithsonian Center for Astrophysics in Cambridge, Massachusetts in the US.

Astronomers know already that this can happen to stars - the first of these was spotted seven years ago, heading out of the Milky Way at 1.5 million mph.

How does this happen?

At the centre of our galaxy there's a really big black hole - called a supermassive black hole - which can tear apart whole star systems.

How fast is 30 million mph?

If a dual star system - like our Solar System, but with two suns - goes too close to this black hole, one star would be swallowed up by the hole and the other would be flung out at high speed with a slingshot effect.

Scientists now think that any planets that were orbiting the swallowed star could be flung out in the same slingshot manner.