Signs of ice found on Mercury 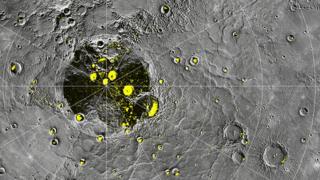 NASA
This shows the areas always in shadow are the same as those that may have ice.

A Nasa spacecraft has found signs that there may be ice on Mercury.

The planet is the nearest to the Sun and its surface temperature can be very hot - over 400C.

But there are craters at Mercury's poles that are always in shadow, turning them into what's known as cold traps.

Some areas on the planet reflect radar - which is a sign that ice could be there.

And now the Nasa has found that these areas are in the same places as the shadowed craters - giving more signs that there may be ice on Mercury.