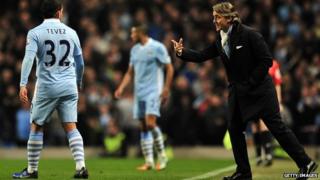 And it was the Argentine striker who created Samir Nasri's winner as Man City came back to beat Chelsea 2-1.

Roberto Mancini's side were a goal down when the City boss decided to bring Tevez off the bench back into action.

The striker reminded his team what they had been missing as City turned the game around to pick up a crucial three points.

And Mancini says Carlos Tevez can now play a crucial part in their Premier League title pursuit - City are now only one point behind league leaders Man Utd.

This was the first time Tevez has played for the first team since it was claimed he refused to come on as a substitute during a Champions League match against Bayern Munich.

In the other midweek games, QPR came from behind to beat Liverpool 3-2, Tottenham were held to a 1-1 draw against Stoke and Arsenal won 1-0 at Everton.