One Direction get number one album in US 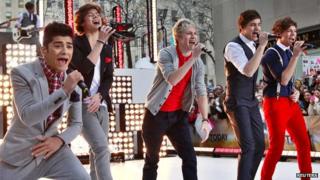 British boy band One Direction have made history with their number one album in America.

The five lads, who shot to fame on the 2010 X Factor series, have become the first British group to get their first album to enter the charts at number one.

This means Zayn, Niall, Louis, Liam and Harry have achieved more than The Beatles or The Spice Girls ever did.

It's also been announced they'll get their own TV programme in America.