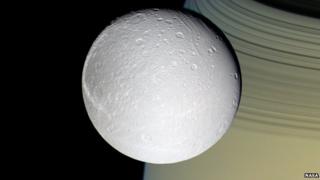 A Nasa spacecraft has found evidence of a possible ice volcano on one of Saturn's many moons.

The new findings suggest that the moon, Dione, is a lot more active than people previously thought.

A satellite on board the Cassini spacecraft also picked up evidence of hot fissures.

These fissures look really similar to those on Enceladus, another of Saturn's moons, and those are known for spewing out jets of water into space.

Scientists have also discovered a thin oxygen atmosphere around the moon.

They don't yet know if Dione will be as active as some of the other moons but it looks like there's plenty going on up there!

The space mission is aimed at unlocking some of Saturn's many secrets and has been circling the planet and its 31 moons since 2004.

Nasa hopes that finding out more about Saturn and it's moons will give them a better idea of how other planets in the solar system have changed over time.