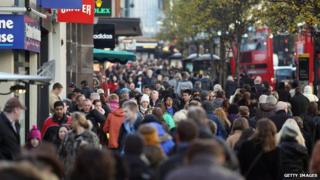 During the Olympics shops in England and Wales might be open for longer on Sundays.

At the moment there are Sunday trading laws which mean big shops are only allowed to be open for six hours.

But the man in charge of all the Government's money, George Osborne, wants to change this because he thinks it would be a shame if shops were closed during the Games.

Some religious leaders are worried the change in law would last longer than just this summer. They think people would start choosing shopping over family relationships and playing in the park.