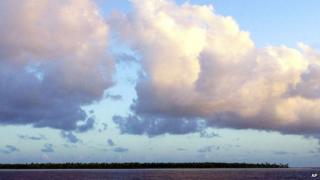 Scientists are worried that ice in the Arctic is melting too quickly which could release dangerous levels of gases into the atmosphere.

One solution being considered is building cloud whitening towers on the Faroe Islands, off the north coast of Scotland.

The idea is that whiter clouds will help reflect the sun's rays back into space to help keep the Earth cooler.

The towers will work by spraying drops of sea water up into the sky to help form whiter clouds.

It won't be easy - the droplets have to be exactly the right size to make it work.

If the droplets are too big or too small the spray would actually cause clouds to break and get smaller, this could mean the air getting warmer not cooler.

Professor Stephen Salter from Edinburgh University works on the technology behind the towers.

He was one of many UK scientists who met with MPs last week to discuss what could be done to slow down the ice melting.

Not everyone feels that trying to alter climate change like this is the best way to do things and it could just make things worse.