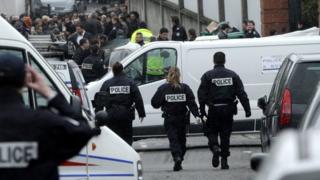 A man riding a scooter has fired shots at a Jewish school in the French city of Toulouse, police say.

A teacher and three children are said to have died in the attack, according to reporters in France.

The French president, Nicolas Sarkozy has gone to the scene. He said "the French Republic as a whole has been hit by this appalling tragedy".

Attacks near schools like this are extremely rare. That's why it has been such a shock.