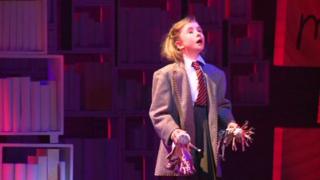 Matilda the Musical has swept the nominations board at country's biggest theatre awards.

It's the musical version of the Roald Dahl book all about a little girl, who happens to be a genius, but has the worst parents ever.

The show was named in every possible category at the Laurence Olivier Awards - giving it 10 nominations in all.

That includes the four girls who play Matilda who've all been nominated in the best actress in a musical category.

Winners of the awards will be announced next month.