Who's your favourite animated character? 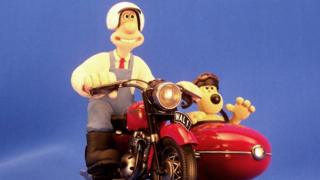 It's the British Animation Awards tonight, celebrating the best of the UK's animated characters that we all know and love.

Awards are given such as best children's series, which Shaun the Sheep won last year.

There are also prizes for animation used in adverts and short films, as well as new animators.

One of the big awards is voted for by the public - for their favourite ever British animated character.

Among those in the running are Wallace and Gromit, Alexandr the Meerkat from the advert, Postman Pat, Peppa Pig, and Charlie and Lola.

We asked you to tell us your favourite British animated character, and what makes them so great?

Get typing and let us know! We might even read your pick out on TV!

"Felix the cat cause my name's Felix. Wallace and Gromit is just funny! Doctor Who Dreamland because I am a Doctor Who addict!"

"I would choose Peppa Pig because she teaches my little sister, Libby, simple things like how to brush her teeth and how to eat your food without making a mess."

"I love Charlie and Lola! Firstly, I love the cute little sausage dog Sizzles. Secondly, my name is Lola!"

"My favourite animated cartoon has to be ROY! He's just so realistic and an amazing cartoon!"

"It's not an officially an animated series but I think a fine example of British animation is Simon's Cat."

"I love Charlie and Lola they remind me of me and my older brother. I also love the pictures, they are so interesting and imaginative."

"I love Wallace and Gromit because they are the original Aardman creation and they are the best British film producing company."

"I think Thomas the Tank Engine should get a prize because I like him - not as much as Tracy Beaker though!

"I reckon it should be Bob the Builder because it is funny."

"I think Charlie and Lola should win as they teach everyone life lessons and they are unique, fun and cute. They have been around for a while and everyone loves them including me!"

"I think that animated Tracy from Tracy Beaker Returns is my favourite!"

"I think Charlie and Lola should win the British Animation Awards because I have watched them since I was small. I like Lola because she is very cheeky but very beautiful with butterflies in her hair."

"I think Creature Comforts because it's funny and I love Aardman."

"My little sis loves Peppa Pig but I always used to watch Postman Pat. I think Wallace and Gromit should win though."

"Even though I am 13, I still have a soft spot for Charlie and Lola! Lola can be really funny sometimes!"

"I love Gromit because he is the clever one but doesn't say anything."

"I love Wallace and Gromit because they like the same things as me CHEESE AND CRACKERS! And they like inventing things, I can't wait for their next inventions!"

"Wallace and Gromit are amazing. I like the way that Wallace is stupid and Gromit is brainy and the they are made out of clay - that is amazing."

"I think Peppa Pig should get the award because little kids always watch that show and it's really good. I watched it when I was little and I really enjoyed it."

"Wallace and Gromit are by far the best. Nick Park has put so much effort into making them. They should win!"

"I love Charlie and Lola, it's sweet, funny and realistic and the books are really good. I think it should win."

"I think Shaun the Sheep should win. All day I have been watching repeats, as I'm ill, and I've been laughing my head off! GO SHAUN THE SHEEP!"

"I love Wallace and Gromit, they are amazing! I've watched them since I was two and I even had a game on my Sega! I hope they continue to make movies!"

"I love Wallace and Gromit and Shaun the Sheep but there haven't been any new episodes for soooo long! So my favourite is Charlie and Lola, it's so SWEET! It's the best babies' show EVER!"

"I like Dennis & Gnasher because it makes me laugh."

"I love Postman Pat because he has interesting adventures."

"I love Dennis the Menace because he's so funny, really cheeky and naughty. I love his dog Gnasher!"

"Charlie and Lola and Peppa Pig."

"I think Wallace and Gromit should get the prize. They have been around for quite a long time, they're known by everyone and they're for pretty much all ages and never get boring."

"I think Charlie and Lola are the best cartoon characters in the whole world. They teach my little sister how to be a good sister."

"Wallace and Gromit are amazing. We like the way that they're made out of clay. We like that the human is really stupid and the dog is really clever."

"I think Charlie and Lola should win the British Animation Awards because they been on TV for a long time and it's very funny, but sad at the same time."

"I love Shaun the Sheep because the series makes me laugh."