Saltwater crocs have the strongest bite 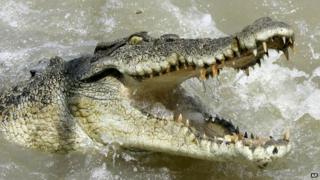 Saltwater crocodiles have the strongest bite of any living animal - and that's a fact - scientists say.

The huge reptiles, which can be more than 6m long, have jaws that snap shut with a force of around 1,700kg - almost twice as strong as a great white shark!

The bite of all 23 living species in the crocodile family were measured, including alligators and caimans.

Scientists say it's been important for crocs to develop strong bites for them to survive.

But even the saltwater crocodile doesn't chomp as strongly as the largest of its extinct ancestors, some of which had bites double the strength of Tyrannosaurus rex.