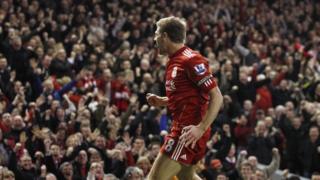 The 3-0 result is the Reds' biggest win in a Merseyside derby for nine years.

Stevie G scored once in the first half and twice in the second - including a goal in the final minute!

The captain hailed his squad: "We worked really hard against a good team... To get three points is the perfect night for us."

Liverpool have lost their last three games in Premier League.

Gerrard wants the win to spur on his club: "We need to find a level of consistency where we go on a winning streak."