A family in Norway had an extra terrestrial encounter yesterday when a meteorite crashed through the roof of their shed.

The rock weighed about the same as two cans of fizzy drink, and probably came from a meteorite seen over Norway on 1 March.

It was identified as a 'breccia' which is a rock made of broken fragments of minerals and they are rarely found.

The family want to keep their find in Norway, maybe in a museum. 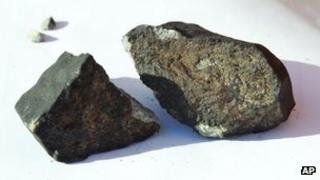 AP
The meteorite could be worth a lot of money!

Meteorites falling to Earth aren't rare, but they generally break up as they enter our atmosphere.

It's very unusual for pieces to fall on houses and sheds!

Experts say that the meteorite could be worth a lot of money.

A meteorite from Mars can be worth over £500 per gram, although it's not yet clear where the meteorite pieces in Oslo came from.