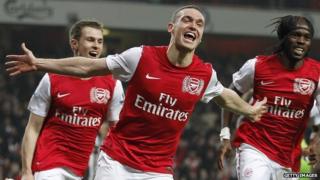 Arsenal had a dramatic 2-1 home win over Newcastle putting them just a point behind third-placed Tottenham in the Premier League.

Early on in the match Hatem Ben Arfa put Newcastle ahead with his goal - but the lead lasted less than a minute.

Robin van Persie equalised for Arsenal, scoring his 33rd goal of the season.

And then Thomas Vermaelen hit his amazing winner for the Gunners in the final few minutes of the game.

Arsenal are now just a point away from their fellow London rivals Tottenham, who had enjoyed a 12-point cushion over the Gunners just six games ago.